Posted on January 14, 2018 by twobrancheshomestead 9 comments

A few years ago we decided to add honey bees to our homestead.  We had noticed that they were absent from our garden and small orchard.  And after a few years of poor apple crops we decided to take matters into our own hands.  After months of research we took the plunge and ordered our first package of bees. As soon as we placed the order we started getting ready for their arrival.  We picked a site close to the garden and orchard with access to water.  This spot receives sun throughout the day so we knew it would keep them active and also warm in the winter.  We have bears in the area so we built an electric fence with a solar charger, which we were later able to also utilize for our pigs. We then began construction of the hives. 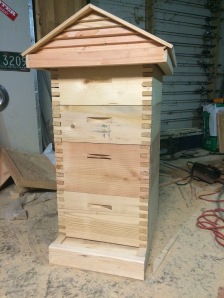 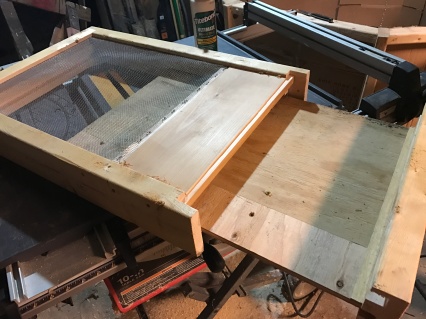 We chose to build our hives out of 2x lumber for several reasons.  We live in a cold climate so the thicker hive wall offers more insulation value.  They are more durable and last longer.  We also used a screened bottom board to help control  parasites.  On top we used a peaked roof with cedar shakes, the roof also has an airspace like your attic to help keep the bees warm and discourage condensation.  In addition, we built a top bar hive out of rough cut lumber to use in case we were able to catch a swarm.  We then moved them into the apiary.

The arrival of the bees

The first time you deal with bees is very nerve racking.  Nothing can prepare you to walk up to the beekeeper and he hands you a cage full of bees.  We overcame our fears, placed the bees in the backseat and went home.  We had decided on package bees instead of a nuc (nucleus or a few frames of an existing hive)  mostly because of cost.  They are about 50 dollars cheaper.  Once we were home it was time to install the bees in the hive.  We put on our bee suits and got to work. 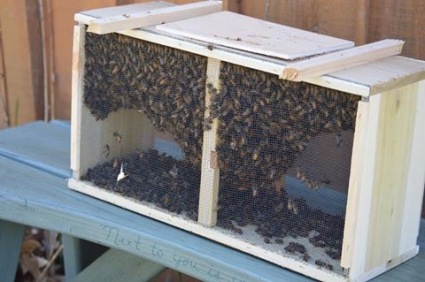 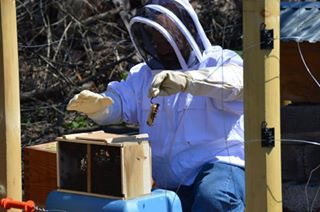 We then installed the bees in the hive.  We sprayed the package with sugar water to get the bees calmed down.  We then removed the queen cage took out the wooden plug and hung her between two frames.  We shook the bees down in the package and dumped them into the hive. We then closed the top of the hive and left the package with a few bees outside. They would eventually find their way in.

After a week we checked to make sure the queen was out of her cage.  The workers had done their job eating the candy that held her in.  A few weeks later we did an inspection to see if she was laying.

We then monitored the hive with weekly inspections to see how the bees were progressing.  Bees can fill up frames very quickly and at one point must have run out of room because they decided to swarm.  We didn’t see the signs which include the workers making queen cells.  When bees swarm the old queen leaves the hive with half of the bees and resources.  The new un-mated queen is left behind with the rest. Once she mates, she will begin laying and the hive will recover.  While this is happening, there is a break in the brood cycle (queen laying eggs) which can be beneficial as some parasites feed on the larva.

The video above is one of the swarms that we have had, when bees swarm they are less likely to sting because they are full of pollen and honey and they can’t bend enough to sting.  The following video shows us catching a swarm.

Once you catch a swarm, you can install it into another hive.  Preferably more than 4′ away from the old hive.  We placed ours into a top bar hive. (remember that one we built, just in case?) The top bar is different in several ways from a langstroth hive.  I am sure we will talk about top bar hives in another blog.

Finally in the fall our bees had enough extra honey that we could harvest a few frames.  Bees need at least 60lbs of honey in our area to make it through the winter.  We weighed a frame of honey and did the math.  Then we harvested a few frames.  Along with the honey we were also lucky enough to be able to harvest some bees wax. 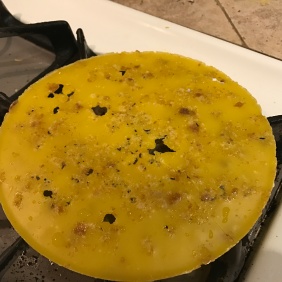 Our first year of beekeeping was a success.  Now we had to wait through the long winter to see if our bees made it. On very warm days bees will take a flight to get rid of their waste. This is called a cleansing flight.

We are always happy to see them in January or February taking these flights. Once spring arrived, we were delighted to see our bees foraging again.  They had made it.  We really enjoy watching our bees come and go.  Mowing takes a little longer because I try not to run them over while I mow.  My neighbor even left a patch of his lawn with clover that was blooming un-mowed for them.  We think they are fascinating and an excellent addition to the homestead.