Posted on January 26, 2020 by twobrancheshomestead 13 comments

We have all been there.  We have big plans for the weekend, and have spent the entire week looking forward to it.  Early in the week, we see a few raindrops for Saturday in the forecast, but we are still hopeful. The chance of rain percentage goes from 30 to 90, and by Friday they are calling for 1″ of rain.  This happened to us this weekend.  We had big plans to go ice fishing for only the second time this year.  The ice has been hovering around 4″ thick, which is just enough.  But with rain coming and temps in the 40s it was not worth taking the risk. We woke up determined to make the most of our day.  So with a nice warm cup of coffee in hand, we made our plans.  We started the day by making some soap.

We always have the supplies around and jars of pig lard in the fridge.  We started making soap as a way to make use of the large amounts of pig fat we receive when our pigs are butchered. 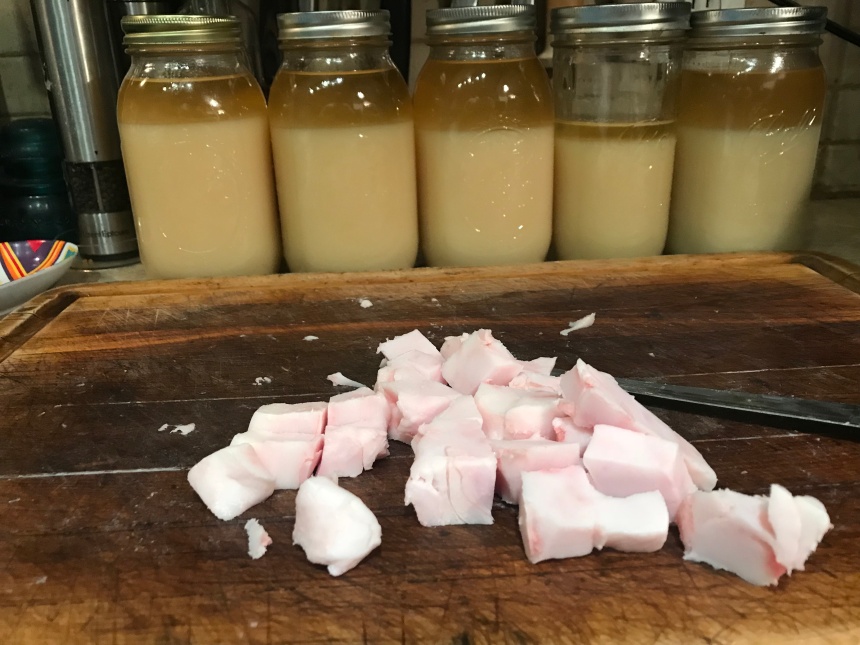 Old homesteaders did the same thing though there soap was little more than lye and lard.  We were given so much advice when we started making soap from our friends in our online homesteader community on Instagram. The fun part of making soap is making the recipe.  We use an online soap calculator so that we get the ratios just right. This takes the guess work out of it and allows you to add and remove ingredients easily.  We try to use ingredients that we have from our homestead, such as pig lard, bees wax, maple syrup, or honey.  We also use coconut oil, olive oil, lye, coffee, and of course, beer.  The soap making process is fairly straight forward. And once you have the few tools needed, it moves along quickly.  We were even gifted a wonderful soap mold by a friend who is a master soap maker and has her own soap business.

The hardest part of soap making is the long wait for the soap to cure which can last for more than a month.  But the results are well worth it. 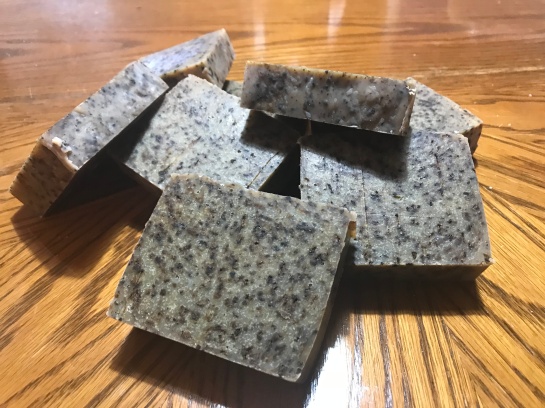 Next on our list was making sausage.  We have recipes for hot and sweet Italian sausage and have been working on a soppressata recipe.  While the second cup of coffee was being poured, we began to break down the pork shoulders. We always use the boston butt for our sausage it gives us the perfect amount of fat.  The butts are cut into 1″ strips and then ground.  We use our kitchen aid mixer and the grinder attachment.  We then soak our natural hog casings and season the meat.  We use fresh garlic from the homestead as a rule in all of our sausages, we also grow our own basil and hot red pepper. 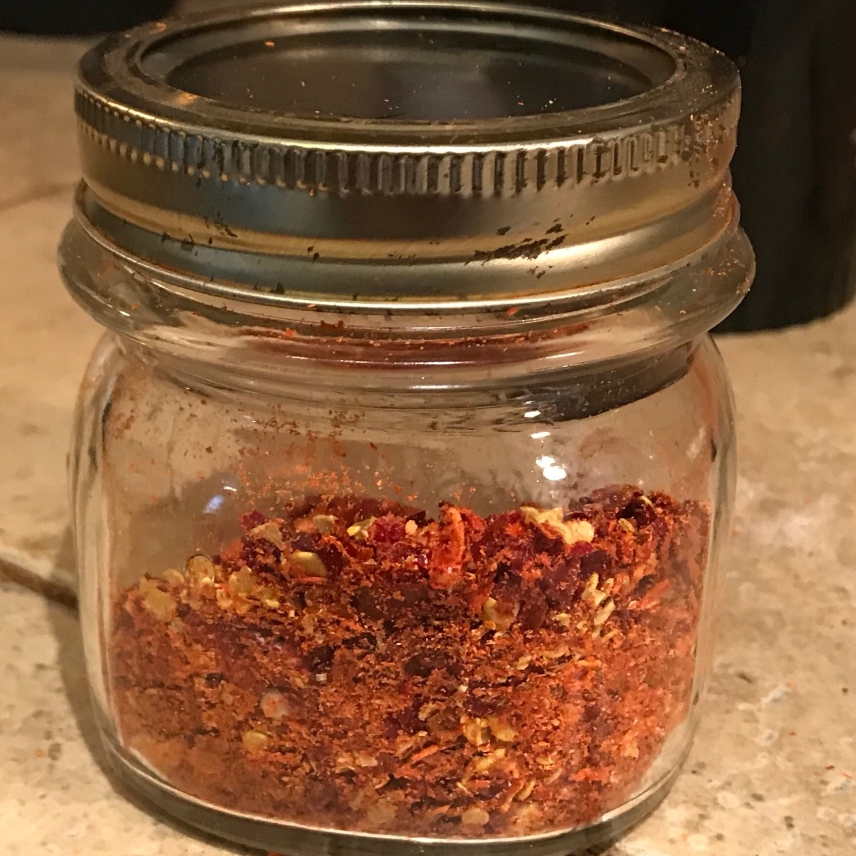 After a few hours in the fridge the sausage is ready to be stuffed.  This is usually something we do at night with a glass of wine, because stuffing sausage can never happen without several in appropriate jokes, but today we just went for it. 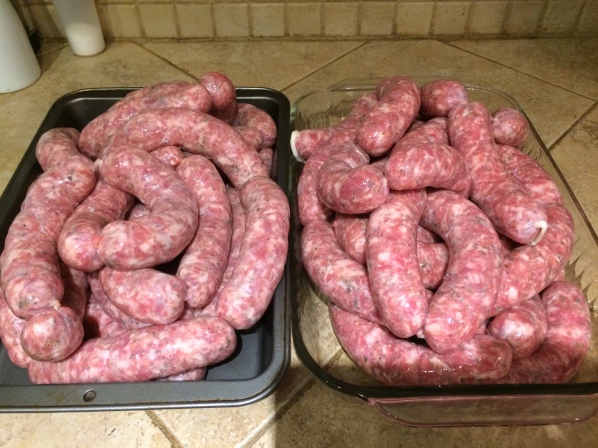 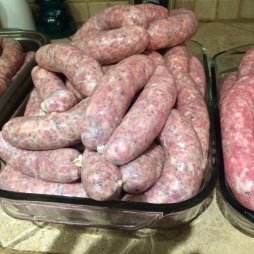 Before we knew it, it was already time for some lunch, which consisted of turkey sandwiches from a turkey we raised, and chicken and kale soup from you guessed it chicken we raised and kale we grew.  The next very important step was taking a nap.  What is better than a nap on a rainy day with the window slightly open so you can hear the rain.  Rejuvenated from our nap we took on a new challenge, cheese making.  One made Ricotta while the other attempted mozzarella.  We used a basic process with milk and vinegar and had some success.  The cheese tasted great, but the appearance still needed some work. 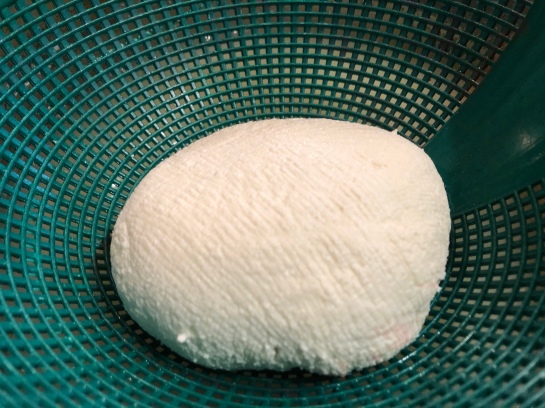 Fortunately, the appearance really didn’t matter much as the cheese since it was going to be used as stuffing for our next project.  Making ravioli.  (see our pasta dough recipe in the “recipes” section under the menu tab) Making pasta is a two man job and we really enjoy it. We prepared the dough using our kitchen aid mixer and set it aside. 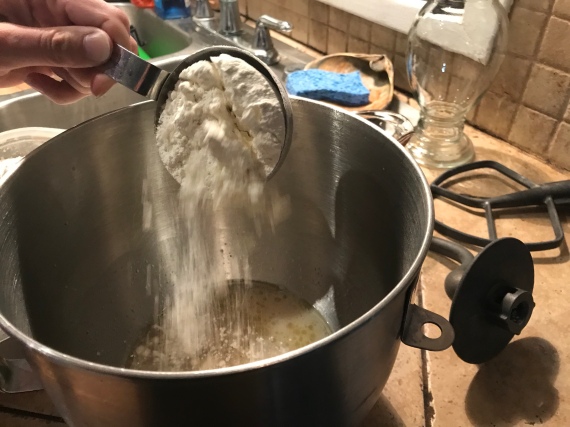 Sauce was started from our canned tomatoes.  We make about four cases of quarts a year from our garden, and the texture and taste cannot be found in a store-bought tin can.

Meatballs were baked and added.  Then the sauce simmered as we tackled the next challenge, rolling out the dough.  When we make ravioli, I roll out the dough and Tracy makes the ravioli using a ravioli cutter that belonged to my grandfather. She prepared the filling from the cheese we made and for the meat ravioli we used some sausage left over from the morning.  The process moves along quickly and semolina flour is everywhere.  When the flour settled, we were left with dozens of beautiful ravioli and a even made a small amount of Fettuccine we infused with basil, made from that pesky small amount of pasta dough that is always left at the end of ravioli making. 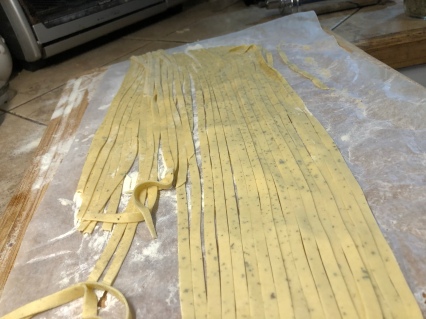 When the sauce was added, we had a meal fit for a king.  We called our mom over and she brought the wine and we all enjoyed the fruits of our labor. That’s what homesteading is all about.  This food wasn’t just made today. It was conceived over the entire year when seeds were planted, animals were fed, vegetables canned, and spices dried.  It was the culmination of all of our efforts and the sense of satisfaction we get from this makes the food and the wine taste even better.